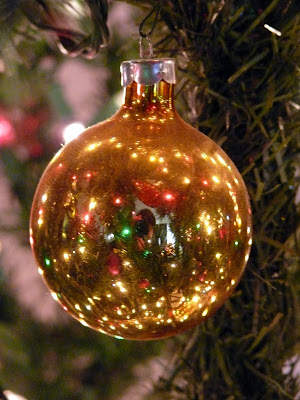 So, I kind of figure that the holidays are officially coming to a close. I suppose I really consider this weekend the “end” so to speak and instead of doing a photo of what seemed rather obvious to me today (some outside snow pic of the Nor’Easter that’s already starting), I wanted to do something that would allow me to say goodbye to the holiday season, which I really love.

I may end up sharing a couple of the other photos I took this morning in addition to this one but I’m trying to force myself to choose one that I feel is unique in some way. (We’ll have to see how long I can hold out on that resolution!). I think I’ll call this one, “Self-Reflection during the Holidays”. I like the fact that it is, indeed an unusual self-portrait and an interesting way to let go of the holidays.

Now, hopefully, I’ll be able to keep motivated and take down the Christmas decorations shortly. I’m feeling the need to try to stay ahead of my usual procrastination and make this one more “baby-step” in figuring out how to do this thing called life.